Vandal-proof boxes and cabinets are traditional means of protecting telecom equipment located in places with limited or no access control. The most popular are safe and pen case types that differ in the way the door opens. On the example of a TLK TWS-096054-M-GY model we’re going to find out if these metal constructions really provide serious protection. 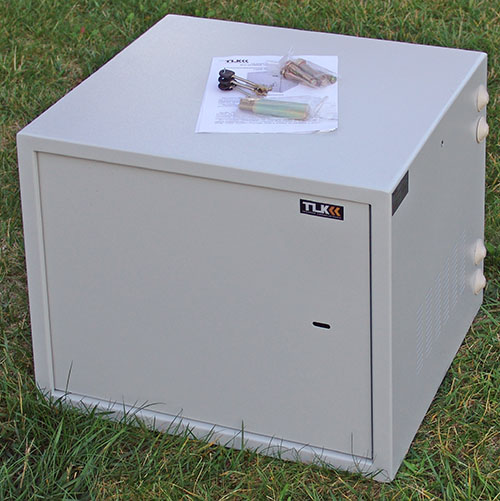 The enclosure at hand is produced as a safe-like undismountable all-welded box that has five braced holes for mounting it on the wall, ventilation grates, detachable transportation handles, cable entries with rubber caps (plugs), grounding of all metal constructions inside and a four-bar lock. The dimensions are 600*545*500 mm. The walls and the door are made of 2 mm flat steel and the lock has heightened security. 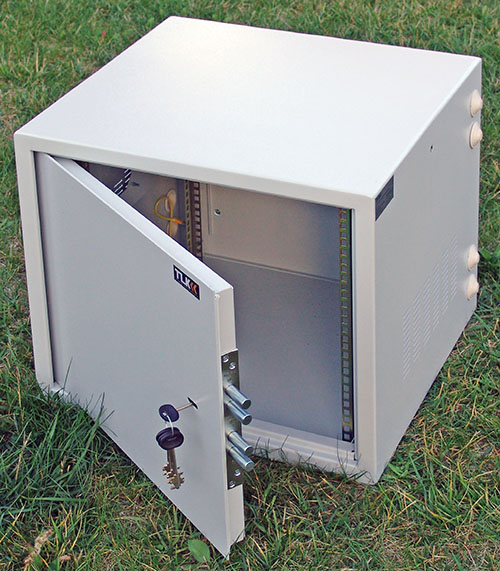 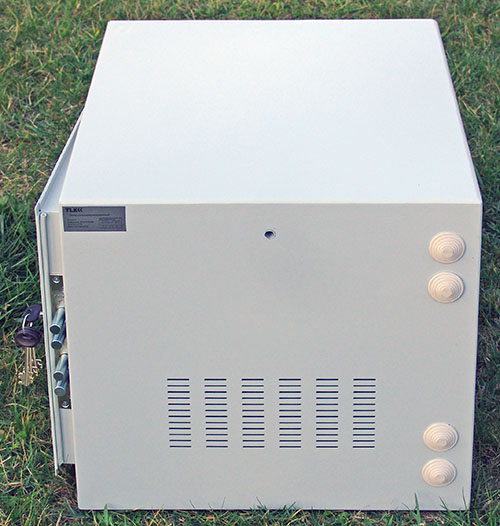 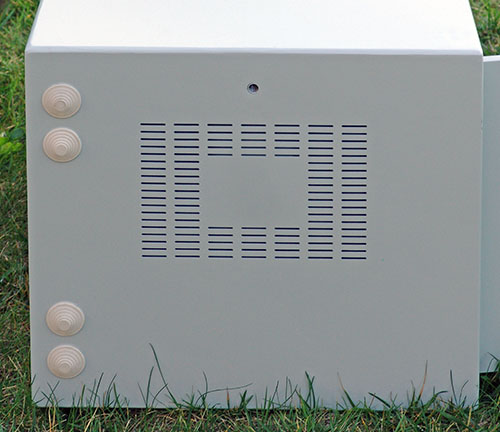 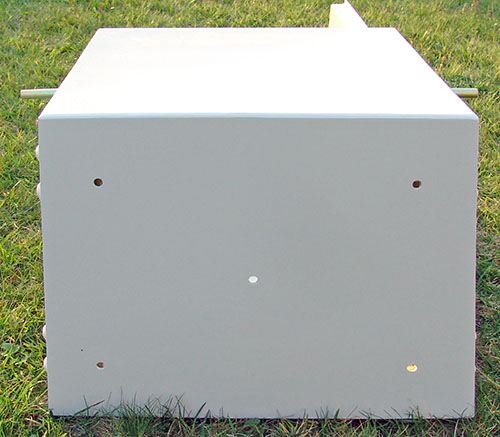 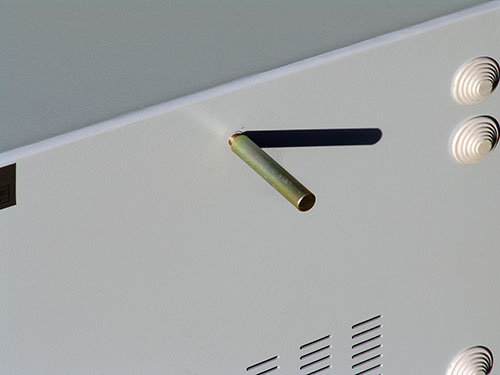 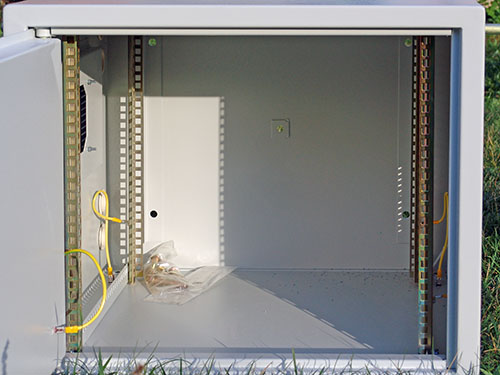 The user manual claims that the given cabinet can protect your equipment from both stealing and vandalism. However, the first thing that caught our attention was nonreinforced cable entries which in the absence of cables in them are not protected at all. Certainly, TWS-096054-M-GY is supplied with rubber caps for unused holes; however, these can stop neither a thief nor a vandal. We deliberately avoided using equipment unavailable to a common thief such as hydraulic shears employed by rescue teams for cutting damaged vehicles after car accidents. Neither did we test the lock against breaking open with a pick-lock or by finding a fitting key as we didn’t have a professional safecracker in our midst. So, we concentrated on testing the construction itself. We used the following tools: a naildrawer (a pry-bar), a cross screwdriver, tin snips (bolt-cutting pliers) and an angle grinder. The latter’s work is very noisy so its operation time was reduced to minimum. However, we consider the use of an angle grinder possible as it can be plugged instead of a light bulb. We made all cuts allowing for the situation when the cabinet is mounted on a wall, i.e. we didn’t try to access it from behind. Lack of a real wall was both a hand and an obstruction to the task: on the one hand, we could freely move around the tested object, on the other hand – we didn’t have such rest and arm as in the case of a real mounted cabinet.

Ventilation grates on the side panels of the cabinet seemed very inviting for starting our attack. Having tried it against breaking open, we found welded sheets behind them. Though they didn’t substantially complicate our task, they aren’t excessive either. 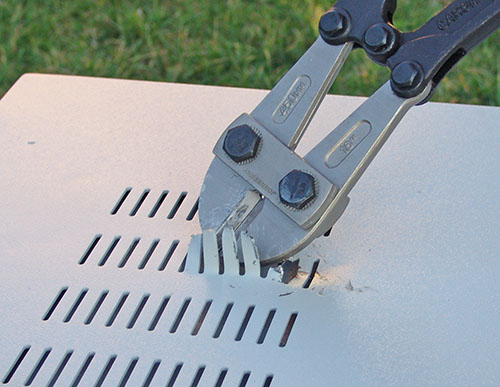 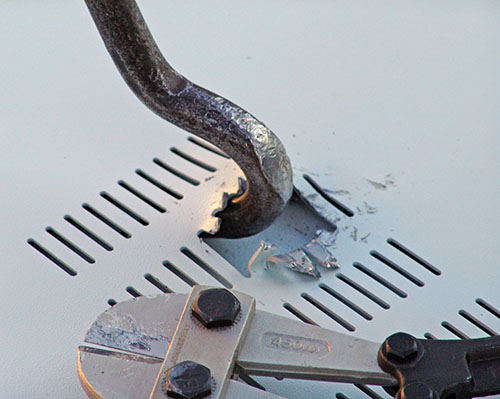 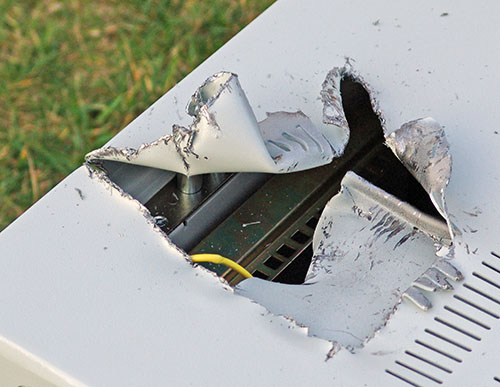 Cutting one of the walls gives access to the protected equipment. You can doubtfully take it out freely and easily, but to damage it is no problem at all. Making a cut with the help of the tin snips makes virtually no noise and allows you to take your time breaking the cabinet. The ribs aren’t heavy-duty, so we readily prolonged the cut further from one side to another. Reinforcing the inner surface of the upper and side walls with a steel armature or angle bars would’ve made the tin snips useless. 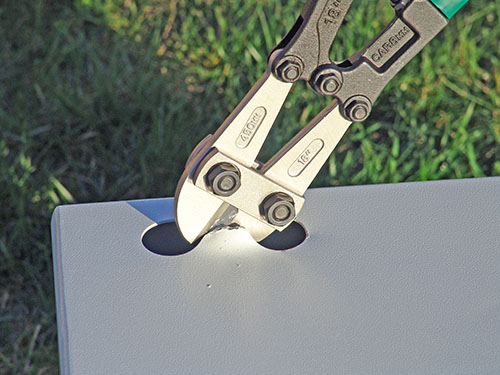 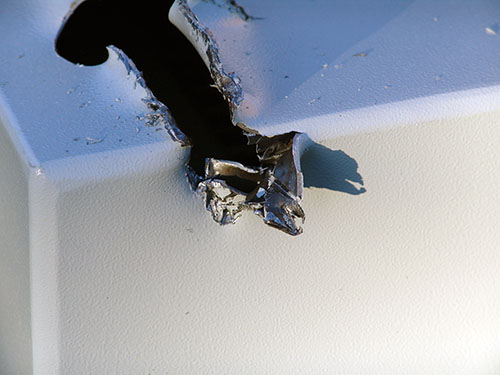 The bars of the lock were full-metal, i.e. they didn’t have a rotating center preventing the use of a saw or an angle grinder. This fact considerably simplifies the process of sawing the bolt even through the closed door. Even an unskilled person can easily change the lock – he only has to unscrew the screws holding the lock in place. Using very expensive locks in such enclosures seems impractical as damage to such a lock by the hands of a vandal will result in financial loss comparable to the cost of the equipment inside.

Thanks to the construction of the door (a two-layer door with a lock in the middle) and its sunken position, TLK TWS-096054-M-GY makes forcing the door impossible or complicated; however, as there is no reinforcement to the ribs of the box, one can quietly cut the part of the side wall behind which the bars go. We also think that additional bars protracting into the upper or the down wall could provide considerable reinforcement. 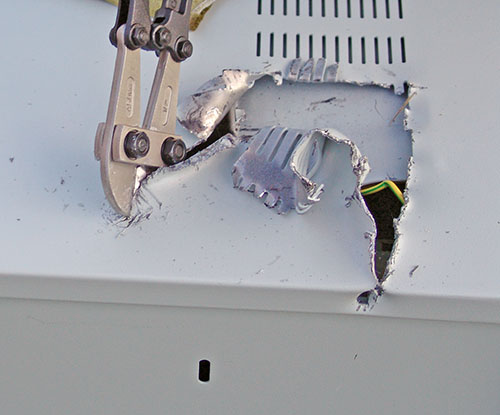 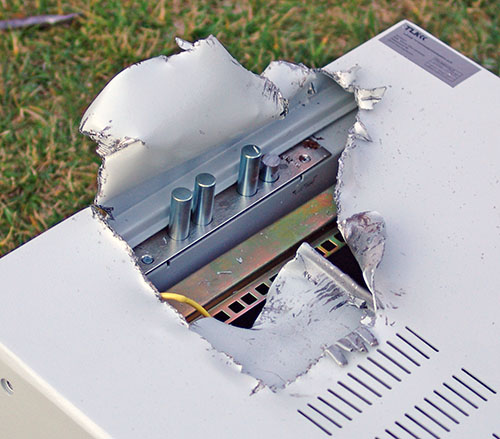 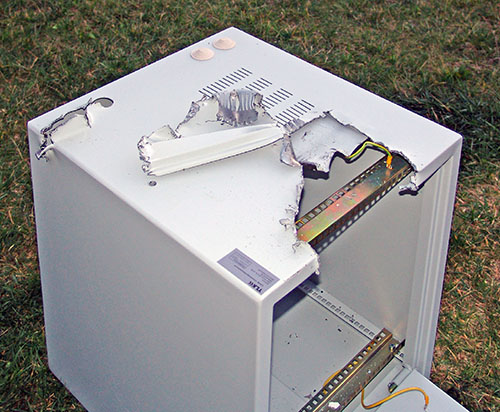 The next object of our attack was the hinges. We got access to them by making H-shaped cuts with our angle grinder. It can also be done with tin snips if you start from the ventilation grate. A cross screw driver and a naildrawer allow taking out the inner part of the hinge and the damaged stay of the cabinet rib doesn’t prevent you from taking the door out. Adding some reinforcement to the place where the hinges are fixed would at least prevent access to them with the help of tin snips. 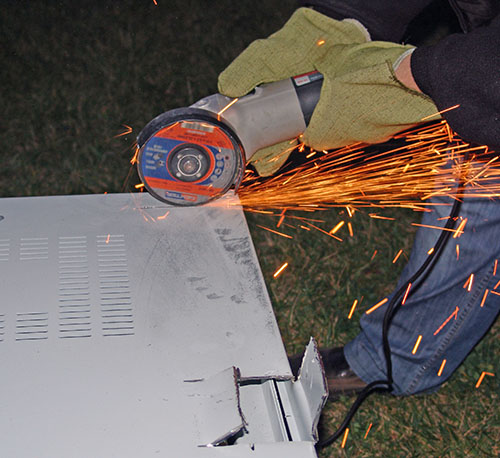 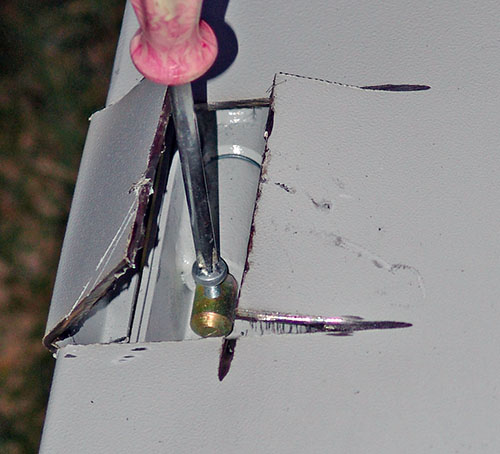 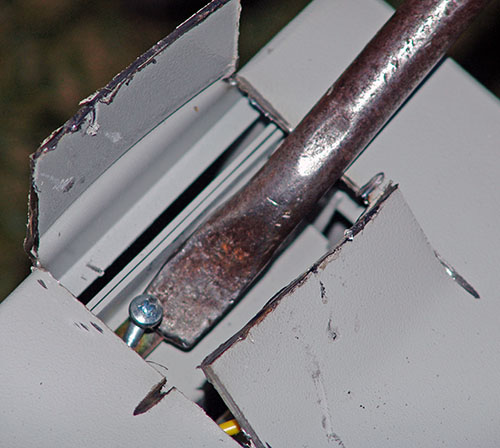 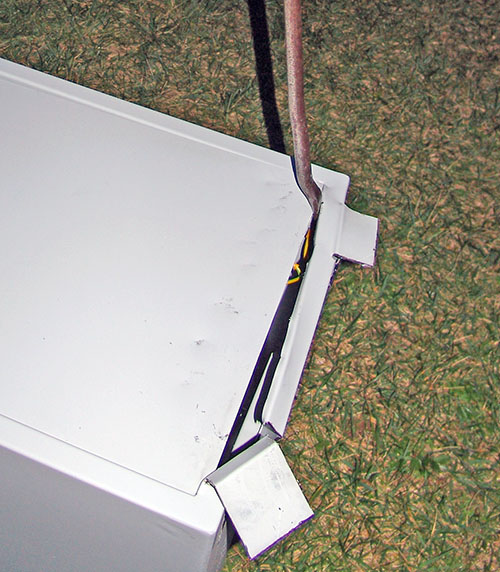 Here we are finishing with trying to break open the TLK TWS-096054-M-GY vandal-resistant enclosure. It’s time to draw conclusions.

The presence of several weak spots allows a prepared perpetrator to get access to the equipment inside the box. It’s worth noting that the task of protecting the contents should be solved through a number of measures. Putting the equipment inside such cabinets is a necessary but not sufficient step. Among other measures we could mention purely technical solutions like installing sound or motion detectors, detectors of vibration or opening of the door, reinforcing the box construction. Also there are administrative tasks like increasing the tenants’ and guards’ vigilance, limiting access to the cabinet. An active monitoring system will reduce the time available to a thief or a vandal for breaking the box. Triggering the detectors should lead to automatic information transfer to the guard service, and the time for breaking open the cabinet must be shorter than the maximum time required for the alarm response team to arrive. It has to be noted that the cost of the cabinet must not exceed that of the equipment inside.

The majority of antivandal cabinets in the today’s market have only a moderate or low level of protection against forced entry. The main differences are in the exterior and the price. The TLK company merchandise looks neat and has a quality coat of paint, which allows installing it in public places. The TWS-096054-M-GY vandal-resistant enclosure is targeted at the corporate market segment and is intended for placing inside industrial premises or in warehouses, in office buildings, banks, shopping centers, underground parkings and other places where the design matters and the time before the alarm response team arrives is short. Otherwise, it’s more reasonable to use more heavy-duty constructions even at the expense of the appearance. It’s worth noting that the vendor doesn’t position this model as one to be placed by providers in roof spaces or in entrance halls, consequently the majority of the ways we described to break open this cabinet can’t be used by perps in practice. Anyway, we already know that our next “victim” is a NETLAN antivandal cabinet produced specifically for such unguarded premises.

The author and the editorial team would like to thank Anton Kortunov, Artyom Ustinov and Pavel Nagibin for preparing and handling the tests as well as the Tayle Company for supplying the cabinet.