A situation when a provider routes limited ranges of IP addresses, for example, arranges communication between two networks /24, is simulated. On this basis for connecting offices a tunnel is created on loopback-interfaces of two client’s border routers, IP-addresses for Loopback interfaces are chosen from the networks, assigned (routed) by a provider.

For better understanding of the task set in the lab it is suggested to make preliminary preparations. Namely, to consider a standard situation of client’s offices routing through a provider’s network (without tunnel configuring). Let the provider assign to the client office two /24 networks. It is necessary to specify IP-addresses for interfaces and to configure static routes for routers Provider, Router1, Router2, according to the scheme given in the lab, not taking a tunnel and loopback-interfaces into account. Mind that for client’s office networks addressing a mask /24 is used.

Now suppose that the situation has changed. A client needs to use more addresses than available in assigned by the provider networks /24. For this purpose when addressing office networks a mask /16 is used. But the provider still routes and assigns to the client networks /24. A solution to the problem of connecting client’s offices can be a tunnel building on loopback-interfaces of two client’s border routers.

It is worth noting that building of the tunnel can be realized using physical interfaces (Router1::eth1 and Router2::eth1) instead of the virtual ones. However the solution based on the use of the virtual interfaces as tunnel endpoints has essential advantage - it provides a certain fault tolerance in case of several providers or several connections usage. Assume that the client decides to use additionally another provider - Provider2 - and connects to its router his own L3 devices (through Router1:: eth2 and Router2:: eth2 interfaces). We will consider a situation when Tunnel0 uses the physical interfaces eth1. In case of the card with interface eth1 failure the tunnel will cease to function that leads connectivity loss between offices in spite of the fact that a working path between Router1 and Router2 through Provider2 operator exists. For the solution of this problem it is possible to build additional tunnels between routers, however such approach is poorly scalable.

Now let’s consider building of tunnels using the virtual interfaces. In this case the tunnel operation doesn't depend on a status of physical ports. The only necessary condition is existence of IP-connectivity between the tunnel endpoints. It can be provided by means of static routes or dynamic routing protocols between the client and the provider. Thus, failure of one of the physical interfaces will not lead to a remote network isolation. 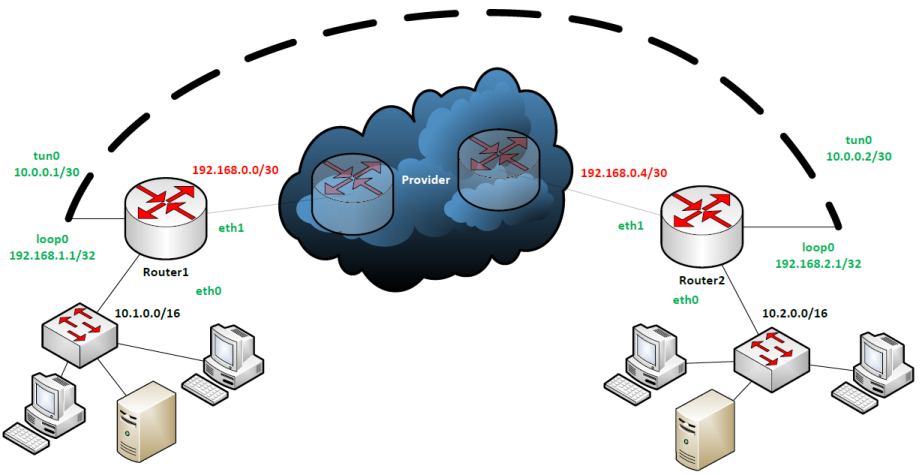 Hereafter let’s turn to the second part of the lab.

Run a dynamic routing protocol EIGRP, with which establish adjacency between two office routers via tunnel interfaces. Using this protocol give routing information about all connected networks.

With the concurrence of a tutor correct the occurred problem. To solve it a configuration of client’s routers should be changed so that by EIGRP information about all connected networks, except a loopback-interface, was sent. Route-map mechanism will be used for that.

Annotation. Get acquainted with distribute-lists and prefix-lists concerning the given lab.